Born in Brooklyn, New York son of Peruvian veteran stage and TV/Film actress Teresa Yenque. Jose Yenque has over a decade of experience as a professional actor and devoted humanitarian, which earned him an Honorary Doctorate of Fine Arts from California State University San Marcos.

Recently Yenque completed filming on the Netflix original comedy series “On My Block” and is in development of a documentary based on his 19 yrs. of working with youth through the arts in Tijuana, LA and recently in San Diego.

2016 Produced co-wrote and acted in an award-winning short film “In a Parallel World” a co-production with Arts for a Better Tomorrow, a nonprofit organization he founded that helps underserved youth in Tijuana and LA through the arts.  Yenque’s performance as a compassionate Mexican border cop won him a “Best Supporting Actor” award at the 2017 San Diego Film Awards.

Film credits include: Academy Award-winning “Traffic“ opposite Benicio Del Toro and Mike Mills’ “Beginners” opposite Christopher Plummer, “All About The Money” opposite Eddie Griffith and Danny Trejo.

Some TV credits: “It’s Always Sunny in Philadelphia,” “Law & Order SVU” and most recently in Netflix’s “Lucifer.”  He has been recognized by numerous organizations within the entertainment industry, including SAG and the NCLR (Alma Award).

At the age of 14 years, Yenque’s life was turned around by the transformative power of art when his mother New York veteran actress Teresa Yenque (30 Rock, Law & Order) enrolled him in a drama workshop that helped him go from a shy, 230 lbs young man who stuttered, to a confident and gifted actor, at home on the stage and comfortable with himself.

Thanks to this life-changing experience, Yenque created Arts for a Better Tomorrow (ABT), a 501(c)3 international non-profit organization that harnesses the resilience building and healing powers of the theater and media arts, to effect real change and offer positive paths to the future for underserved youth on both sides of the US/MX border. ABT’s social-emotional arts education programs work with teens in Tijuana orphanages and US inner-city public schools to help nurture and support the inner strength and resilience they instinctively have to help face life’s challenges. The program also connects students on both sides of the border through video messaging teaching empathy while creating an international camaraderie

He aims to continue inspiring others, particularly today’s youth, with his work both on and off-screen. 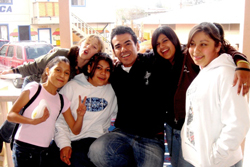 Apart from his work with teens, Yenque has contributed actively to higher education and has lectured on college campuses from coast to coast.  He has teamed up with Professor Darci Strother at California State University San Marcos (CSUSM) to create a study abroad program which in 2009 gave a group of mostly first-generation Latino students the unique opportunity to participate in a classical theatre festival in Almagro, Spain.  He infused a basic Spanish language class with an acting component, resulting in outstanding DVD production and an increase in motivation and confidence in students’ Spanish-speaking abilities.

And, based on his 10+ years of dedication to the orphans of Casa Hogar Sion in Tijuana (for which he won a Sol Azteca award in 2007), he co-created a service-learning opportunity, “Hands Across Our Border,” which has brought together hundreds of university students from the U.S. and Mexico to help meet the needs of this extremely vulnerable group of children.  Yenque recently presented and discussed his work at a special session of the Association for Theatre in Higher Education’s annual conference, and was met with interest from college faculty across the country.  Professor Kristine Diekman has tapped into Yenque’s expertise for several projects involved in her “Video in the Community” initiative.  Yenque served as the narrator and co-producer for “Never Too Early, Never Too Late,” a gang-prevention DVD distributed free of charge to families and educational and social service organizations nationwide.  He and Prof. Deikman are currently producing a new DVD and handbook to foster teen pregnancy prevention, an innovative project that will help open up the dialogue between parents and their children.

Many interests that go hand in hand

Yenque’s success in working with young people parallels his success on the screen and stage, and he is committed to weaving together his considerable skills and talents as both an actor and humanitarian.  To this end, he served as a celebrity co-host, along with Al Gore, Michael Welsh (“Twilight”), and others, for the National Wildlife Federation’s “Campus Chill-Out,” an award show honoring campus’ solutions to the global climate crisis. His commitment to social causes includes helping support the Puerto Rican Traveling Theatre through appearing in a 2008 PSA, and in a 2009 virtual telethon for the Foundation for Orphaned, Abandoned and Disabled African Children, alongside Shirley Jones.